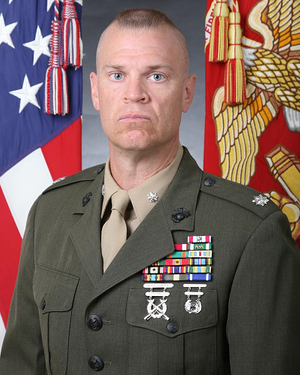 Lieutenant Colonel Johnston was commissioned as a Second Lieutenant in May 1994 after graduation from Villanova University with a Bachelor of Arts in Political Science.

After completion of The Basic School he was transferred to Marine Aviation Logistics Squadron (MALS) 31 in Beaufort, South Carolina prior to completing the Aviation Supply Basic Qualification Course in May 1996.  He was promoted to First Lieutenant in May 1996 and returned to MALS-31.

He served as the Material Management Division Officer in Charge (OIC), MALS-31 Detachment OIC for Combined Arms Exercise (CAX) 9, MALS-31 Detachment OIC for Operation Decisive Edge in Aviano, Italy, Supply Response Division OIC, and Consumable Management Division OIC.  In July 1998 he was promoted to Captain.In January 1999 Captain Johnston was transferred to 1st Recruit Training Battalion, Marine Corps Recruit Depot, Parris Island, South Carolina.  He served as a Series Commander for Bravo Company, Executive Officer for Alpha Company, and Commanding Officer for Charlie Company.  In June 2001 he was transferred to Amphibious Warfare School (AWS) in Quantico, Virginia for resident Professional Military Education.After completing AWS in May 2002, he was transferred to MALS-36 in Okinawa, Japan to serve as Assistant Aviation Supply Officer.  In May 2003 he was assigned as the MALS-36 Detachment OIC for Exercise Cobra Gold in the Kingdom of Thailand.  In June 2003 he assumed the duties as Aviation Supply Officer.  In July 2004 he was promoted to Major. In June 2005 Major Johnston was transferred to Defense Logistics Agency - Aviation in Richmond, Virginia.  He served in the Customer Operations Directorate as Chief, Marine Corps Aviation Customer Branch.In June 2008 he returned to MALS-36 for service as Executive Officer.  In June 2009 he deployed to Iraq as an Individual Augment.  He served at Camp Victory in Baghdad as the Multi National Corps Iraq Joint Operation Center Battle Major.  After returning from Iraq he reassumed his duties as Executive Officer.  In November 2010 he was promoted to Lieutenant Colonel. In January 2011 Lieutenant Colonel Johnston was transferred to Aviation Logistics Department (ALD), 1st Marine Aircraft Wing where he served as Deputy Assistant Chief of Staff, ALD and Wing Supply Officer.            In May 2012 Lieutenant Colonel Johnston assumed command of MALS-36.  He relinquished command in May 2014 and retired from the Marine Corps.Lieutenant Colonel Johnston’s personal decorations include the Defense Meritorious Service Medal with oak leaf cluster, Meritorious Service Medal, Navy and Marine Corps Commendation Medal with two gold stars, and the Navy and Marine Corps Achievement Medal. 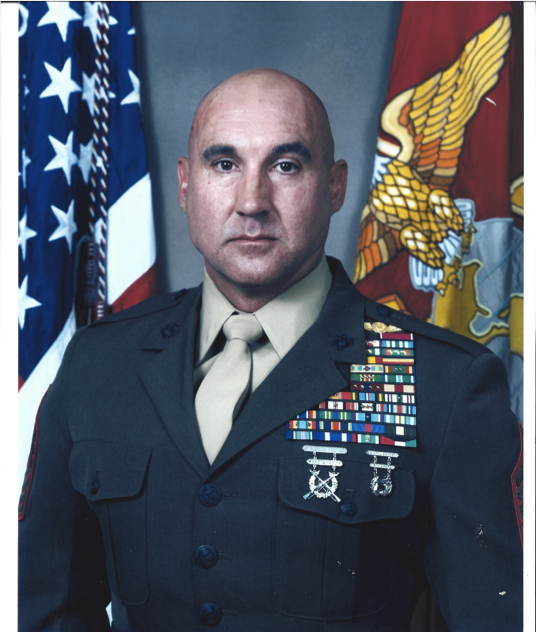 After graduating from MOS school, he was assigned to 2nd Battalion, 8th Marine Regiment, 2nd Marine Division located aboard Camp Lejeune, North Carolina for duty as a Machine Gunner (0331).

During his six year tour, he deployed several times, most notably in support of Operation ENCOURAGE HOPE and FORCE HOPE in Northern Iraq. In May of 1994, he reported to Ground Defense Security Force Company, Guantanamo Bay, Cuba for duty as Platoon Sergeant.In May of 1995, he received orders to Drill Instructor School, Parris Island, South Carolina. During this tour, he served as Drill Instructor, Senior Drill Instructor and Operations Chief for Lima Company, 3rd Recruit Training Battalion. In 1997, he was selected as the 3rd Recruit Training Battalion Drill Instructor of the Year and was meritoriously promoted to Staff Sergeant.In 1998, he received orders to Marine Barracks, 8th and I, Washington, DC. During this tour, he served two years as the Platoon Sergeant for the United States Marine Corps Silent Drill Team.In 2000 he received orders to First Fleet Antiterrorism Security Team (FAST) Company, Marine Corps Security Force Battalion where he served as Platoon Sergeant, Operations Chief, Company Gunnery Sergeant, and Senior Enlisted Advisor. During his tour, he deployed several times including deployments in support of Operation SOUTHERN WATCH and Operation IRAQI FREEDOM.After being selected for First Sergeant in 2004, he received orders to Inspector-Instructor Duty, 1st Battalion, 25th Marines, 4th Marine Division located in Ayer, Massachusetts, where he served as the Site, Headquarters, and Weapons Company, First Sergeant.In 2007, he received orders to serve as the First Sergeant for Bravo Company, Marine Wing Communications Squadron 38, Marine Air Control Group 38, 3D Marine Aircraft Wing and deployed in support of Operation IRAQI FREDDOM.In May of 2009, he was promoted to his current rank and assumed duties as the HMM-161 Sergeant Major. During this tour he earned the Naval Aerial Observer/Gunner designation. In October of 2009, the unit was re-designated as VMM-161, the first West Coast V-22 Osprey Squadron. Sergeant Major Herman assumed duties as the HMH-466 Sergeant Major in December of 2009 and deployed to Afghanistan in support of Operation ENDURING FREEDOM.In February of 2011, he was assigned as the Sergeant Major of Recruiting Station Charleston, West Virginia where he served until September 2013.In October 2013, he was reassigned as the Sergeant Major of Expeditionary Warfare Training Group, Atlantic (EWTGLANT).Sergeant Major Herman’s personal decorations include the Legion of Merit, Meritorious Service Medal with three gold stars, Joint Service Commendation Medal, Navy and Marine Corps Commendation Medal with two gold stars, Navy and Marine Corps Achievement Medal with three gold stars, Combat Action Ribbon and the Military Outstanding Volunteer Service Medal.Sergeant Major Herman holds a Master’s Degree from Marshall University in Leadership Studies and was the honor graduate at Amphibious Reconnaissance School (ARS).

The mission of Lake Cormorant High School (LCHS) Marine Corps Junior Reserve Officer Training Corps (MCJROTC) is to provide a program of leadership instruction that includes extracurricular activities in order to instill in the Cadet the value of citizenship, service to the United States, personal responsibility, and a sense of accomplishment.

We will focus on achieving five objectives:

We must first be rooted in the Marine Corps’ Core Values of Honor, Courage, and Commitment.  We will exercise integrity in all situations, whether someone is watching or not.  We will have the moral courage to step in and say or do something to correct a problem.  We will be committed to our families, our fellow Cadets and Students, the school, the program, and the task at hand. Our Core Values are the foundation that will ensure our actions are above reproach and will enable LCHS MCJROTC to achieve the above objectives and to complete our mission.

We expect each Cadet to put forth maximum efforts at all times.  We expect that each of you will seek self- improvement in all facets of this program and utilize teamwork to build each other up.  For those in leadership positions, understand that leadership at every level is the key to success.  We expect each leader to mentor and assist in developing your fellow Cadets as we work toward achieving our five objectives.  Personal development for all Cadets includes both mental and physical fitness.  Each Cadet must learn the curriculum details and apply the broad concepts in practical ways during daily life.  Every Cadet will strive to improve their physical fitness.

The end state is the creation of young citizens well versed in leadership, instilled with strong moral character, a sense of personal responsibility, patriotism, and a deeper understanding of their responsibility to country, community, school, family, and friends.

The opportunity to serve as the LCHS MCJROTC instructor is an honor.  We look forward to instructing and mentoring the Cadets, and working with the Cadet's parents and guardians.

Promotions are an honor and a privilege. Those cadets receiving promotions must possess the prerequisite abilities and skills. Primary authority for promotions rests with the SMI. The promotions guidelines are described below:

•       Time in Service (TIS) – Normally will spend a certain amount of time in service before being considered for promotion (TIS details below).

•       Overall behavior - Includes other forums such as other classes, outside of class, sports teams, etc.

2.   Cadet officers and staff noncommissioned officers that do not meet the minimum GPA of “2.5” will be placed in a probationary status for the following semester. The Cadet will have one grading period to meet the standard for rank retention or be considered for reduction. Cadets failing to maintain a GPA of “2.0” may not hold a rank higher than Cadet Private.

3.   Cadets failing to perform their duties in an efficient manner will be considered for reduction.

4.   First year Cadets will normally serve in the ranks of Cadet Private through Cadet Lance Corporal.

a. Cadets who departed for disciplinary reasons or were withdrawn in lieu of disciplinary action, and accepted for reenrollment will be appointed Cadet Privates, regardless of rank previously held.

b.   Cadets who departed for other reasons than discipline issues will be accepted for reenrollment and will normally return with the rank they possessed prior to departure. The rank determination is at the discretion of the SMI.